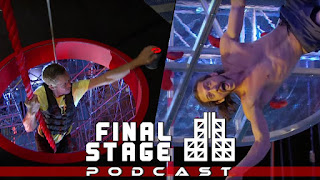 
Thanks to William for adding graphics of a synopsis of the episode content for this month on Final Stage Podcast!  I'm also happy to announce that this and all of our previous podcasts are now officially up on iTunes and on the hosting site of Podbean.

Just a quick update to let you know that the 6th episode for the Final Stage Podcast with William and I is out! It is another long broadcast. I'm also happy to announce that this and all of our previous podcasts are now officially up on iTunes and on the hosting site of Podbean.  The episode went live about half hour ago so it will take a little bit for iTunes to update with the latest episode. It is of course uploaded on Podbean at the same time it goes live on YouTube.

Warning:  Episode has spoilers for ANW 7 since at this point the show has aired in the USA and we are discussing the impact of the Series Finale (along with the controversy) and it's connection to Sasuke. If you missed previous episodes of Final Stage Podcast, they are still available on William's YouTube channel and are noted on my sidebar on the right of the blog.


Published on Oct 2, 2015
I (William) have to be honest; I was not expecting to have this conversation. I thought we were just going to talk about the USA vs The World special and celebrate the fact that anyone around the world can now buy Sasuke 31 merchandise. But not only has USA vs The World not aired yet, but ANW had two people complete its final stage! However, only one person got the cash... and the title of “First American Ninja Warrior”.
... yup.
We have no choice but to talk about this. Join us as we break down the season finale of ANW 7 where we talk about their version of the Crazy Cliffhanger, the controversial results of the Final Stage and the very messy fallout. Also, we talk about which Americans will be competing on X Warrior, TBS's views on internet streaming and their handling of Amagi Brilliant Park, William's journey to the location of ANW, Tobal 2, Sasuke video games, and who William thinks should star in a hypothetical US version of Takeshi's Castle.

This one was a bit weird, so strap in, folks!

Show notes:
0:26 Intro
2:20 William went to the US Open and some video game conventions
7:07 Quick talk about import and Sasuke video games
12:57 William also went to Las Vegas and traveled to the set of ANW
25:06 ANW Vegas finals discussion start
29:38 Discussion about ANW's version of the Crazy Cliffhanger
38:29 ANW 7's controversial Final Stage and the fallout from it
1:00:13 Geoff Britten has been receiving support from the community & how NBC can fix things
1:11:07 More fallout discussion and its connection to Sasuke, both real and hypothetical
1:20:05 Should ANW pay/respect the competitors more?
1:27:58 Closing thoughts on ANW 7
1:33:00 Update on X Warrior's World Event
1:44:32 Anyone around the world can now buy official Sasuke 31 merchandise via Tokyo Otaku Mode!
https://otakumode.com/search?mode=shop&category=&keyword=%22sasuke+rising%22
1:52:29 So why is TBS selling Sasuke 31 merchandise worldwide when no country outside of Japan has aired it? Also, why have they not tried internet streaming?
2:14:50 William pitches an idea for an American version of Takeshi's Castle
2:21:53 Closing