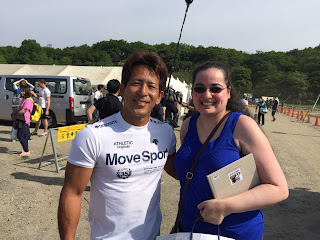 As I mentioned before, Sasuke 31 has officially been taped and before everyone freaks out about the photo and starts staring at the background, I purposefully did not take photo of the course. I'd like to go back to Japan so the last thing I want to do is get anyone in the production team angry at me!  This is near the registration (to the left of the photo where the "food court" is) behind me is just the production tents (behind the fan is where they sold the T-Shirts and other Sasuke merchandise). In fact, the course is to the right past those orange cones. As you can see.. I'm already burning and I didn't even know it at the time. LOL Yeah.. I was quite crispy at the end of the first day and I'm pealing something vicious (I look like a lizard...) from the massive sunburn on my shoulders and arms. Luckily I wore a hat after this photo and my face was spared. I think this photo was before 11 am-noon? It was super sunny and the sun comes out super early so I lost track when this was taken. Oh and for the record, I was surprised that Nagano was my height. I totally suck at metric (centimeters/inches) conversions so I didn't realize I calculated everyone's height wrong! I'm so embarrassed. I'll do a full post on Sasuke 31 (including my photos) AFTER I finish the Sasuke 31 Spoilerific Review which will be of the TBS broadcast. I'm thinking mid-late July at the earliest. 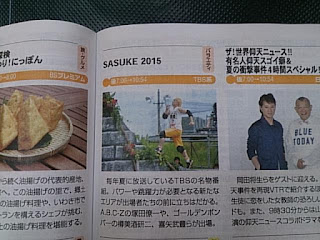 Magazine with information about Sasuke 31 ©LostInUbe

Speaking of the TBS broadcast, we finally have a confirmed date. The Official Sasuke Facebook posted yesterday the confirmed date.  Director Inui has been working some mad hours trying to finish on time.  So the official date is July 1 after all with a time of 19:00 JST. 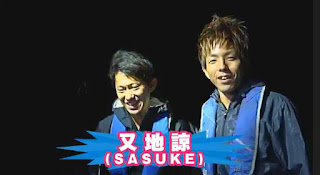 
In other news there were a few events in Japan that sorta happened without any prior knowledge.  An hour before it was going to start, there were tweets mentioning that Yuuji was going to be in some event on Ustream. 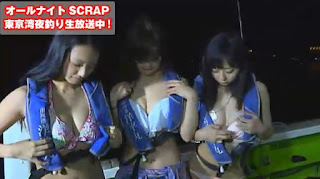 I logged on and sure enough it was an internet special from SCRAP Entertainment promoting some thing tied to the Real Escape Game that it owns and produces.  Inui adapted this game for television and that's where he got his International Emmy Nomination.  So I was expecting more of that. 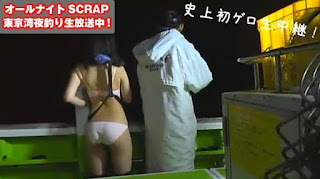 What awaited me however was something I found difficult to describe.. I mean once you have gravure models (think: lingerie models) you have to expect boob and butt shots.. so I was prepared for that.. but I wasn't prepared to see what I saw.. and more importantly.. how Sasuke fit in. 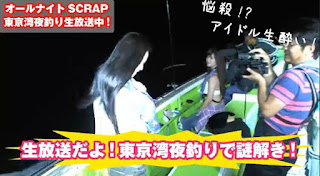 Inui does have a difficult job doesn't he?  Gotta get that zoom on those boobs you know... yeah.. to say that I was uncomfortable watching this was an understatement. 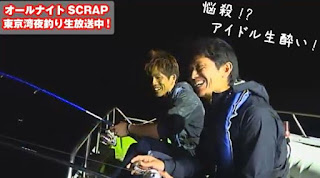 So Ryo and Yuuji were in a fishing challenge with 3 tarts models and a male comedy team.  Yuuji I swear spent most of his time running AWAY from the camera (that Inui was using) and away from the girls who were selling themselves their brand. 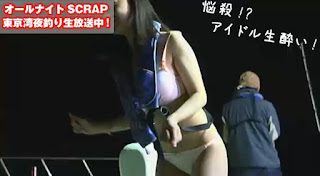 There was a funny point though where out on the boat, one of the girls chased after Yuuji.  It was obvious she was trying to get him more involved in the production.  So in her extremely grating child voice she begged him to play with her... 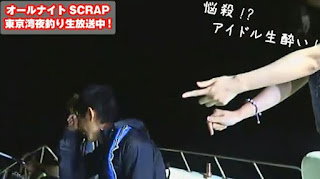 Yeah. he wasn't having any of that. Though it did provide for some hilariously awkward moments. Poor Yuuji. LOL  Ryo at least was more comfortable in front of the camera.  Yuuji kept shoving him forward to talk to the camera when it was Yuuji who was supposed to be the star. 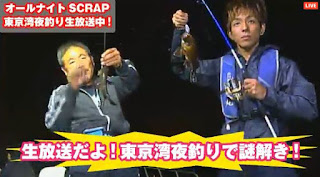 So towards the end, Ryo got a catch. He managed to string 2 fish on a split line.  What turned out is that he tied with the other male group who caught 2 fish (in different casts).  At the end, they did rock/paper/scissors which Ryo won.  So the official winner of this bizarre event was Ryo with 2 fish and "paper". 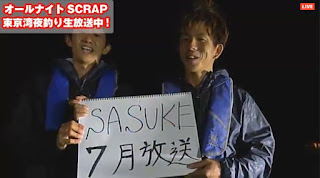 This (obviously before yesterday) was confirming the July month for Sasuke.  They had not confirmed the 1st by that point.  We know know it's literally July 1st.  Just 13 days away! 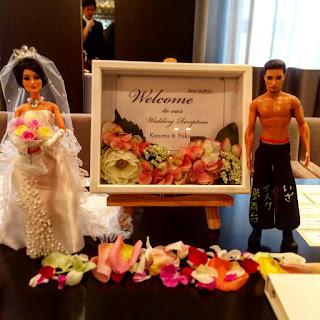 Soon after this event, they all hopped on a plane to Osaka, Japan for what turned out to be a Sasuke wedding!  Asa got married!!! 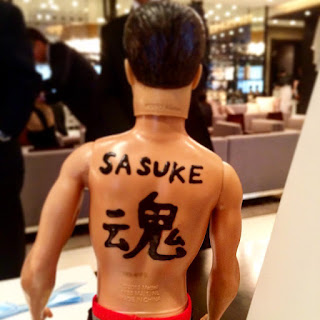 魂：meaning spirit or soul, so his back is meant to read "The spirit of Sasuke or the soul of Sasuke" ©Masato Inui

Okay this was cute!  If you haven't figured out by now, New Generation Star Kazuma Asa 朝一眞 who is best known for his Sasuke pants and painted back got married! 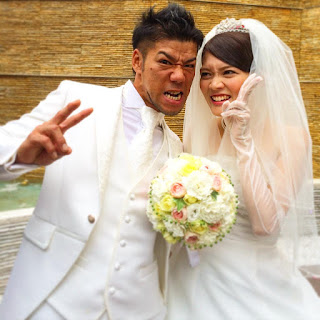 I'm so happy for them!  They had a really nice moment during the tourney that should be great television when it finally airs in a couple of weeks. And given that the Director was also there, I hope it's on Navi!  I love weddings!! 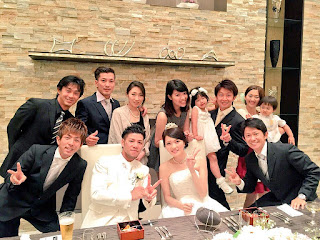 
In attendance was Sasuke All-Star Shingo Yamamoto 山本進悟, Tomohiro Kawaguchi 川口朋広, Ryo Matachi (Cliffer #2) 又地諒, Masashi Hioki 日置 将士 and Two-Time Sasuke Champion Yuuji Urushihara 漆原裕治 (Cliffer #3) with friends and family and they look awesome in this photo!  Out of the posted photographs this was the best one! 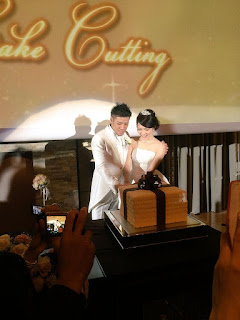 I did find it interesting that they had English everywhere when Asa himself doesn't speak English. LOL Or if he did he didn't practice with me! Why does the cake look like graham crackers? mmmm.. graham crackers.. oooooom nom nom... 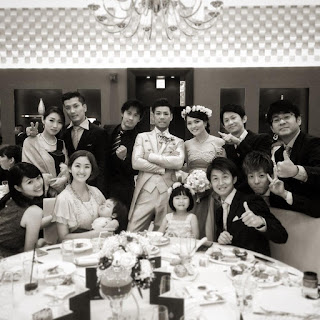 This was the first photo posted where I found out they were at a wedding after that bizarre fishing event online. Glad that Sasuke Director Masato Inui 乾雅人 got in the photo!  They all look great! 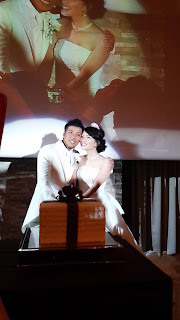 Jumbotron at a wedding. It also still looks like a graham cracker cake.  Gorgeous dress... seriously.. that's a beautiful dress. Very elegant.  I didn't see any traditional clothing so I guess they went with a western style dress. 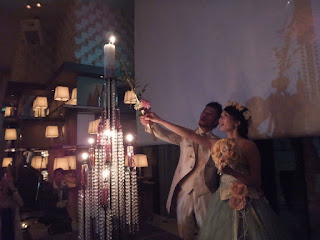 
And it seems they had at least one dress change for her!  He also changed later but those aren't posted. I hope it's in Navi. 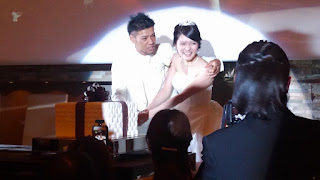 I'm thrilled they look happy during their wedding. It looks like they had a glorious time!  I hope more photos surface soon. I'd love to see more! 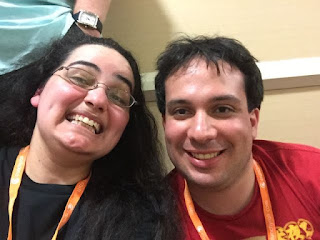 
And finally, I did the AnimeNext panel over the weekend!  I met up with my co-host from the Final Stage Podcast, William and had a good time!  I'll work on getting the video up with a blog post in a few days (most likely next week).  Health has been wonky this past week so I've been behind in a few projects.
Posted by Arsenette at 6:02 PM

That's great news! But do we have a date on Navi?

The timing for the broadcast couldn't be better for me assuming the usual technical genius make it possible for us mortals to see it. And I love them for it

Congratulations to Asa and his pretty wife

Gotta feel bad for Yuuji does not seem confident around women really could do with some of the more confident competitors taking him under their wing.

Geez, RL has taken over my life, where I've barely been following stuff online. Especially the way the past week and a half has been, it's nice to suddenly remember "Oh, hell, Sasuke 31 should be soon, I haven't checked on that in ages" - and then to come online and see that I won't be able to sleep in on Wednesday like normal, but that I can actually be at home to see the whole thing since I don't have to leave to catch the bus(es) to work (moved, no personal car, hence mass transit and two buses to get to work) until just after 10 am ET. Thank you based Inui/TBS for scheduling Sasuke on my late night at work. Just have to wake up earlier than I normally do for normal work days to shower and get breakfast ready before Sasuke starts (and then remember to eat more during the show since I won't eat lunch until late because of work). (g) I'll have to go find the Navi and watch that at some point this weekend - my housemate and I could use some more happy stuff right now, because it has just been such an emotionally and physically draining week and a half. Actually, I have to ask her if she wants to watch Sasuke live also, since Wednesday's also her late night at her library branch, and she drives so she gets to leave later than I...

D'oh for the double post, because my brain really is scattered and fried - today was an especially long day. (sighs) Anyway, congrats to Asa and his lady! The pictures looked great, and they both look so happy.

You and Nagano in a photo together made my day. I'm glad to have helped you with the little donation to have go over there. Time of your life, it sounds like (or at least I hope so). If Nagano or Yuuji had been signing anything, that may have been the one situation where I might have gone over what I budgeted and bought that. Anxious to see what happened and your work, but as others have noted, don't push it too hard.