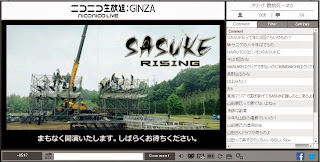 I'm getting ready to leave this week for my long awaited trip to Japan! I'm so excited, I'm jumping out of my skin! The HYPE is real let me assure you of that!  Anyway.. ehem.. a couple days ago I checked my Twitter feed and Sasuke Director Inui was talking about a Nico Nico broadcast. I immediately thought (since I don't read Japanese and didn't run it through the translator yet) that it might have been an announcement of the contest from back in March. But nope.. It wasn't. 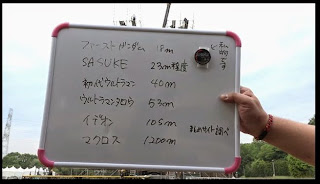 It was an announcement for a Nico Nico broadcast that was coming up in about 12 hours from that message! LOL  I didn't know what to make of it. It said that you could tune in to see Sasuke's iconic Final Stage Tower being built from scratch.. live.. from a fixed camera at the Midoriyama Studio lot. 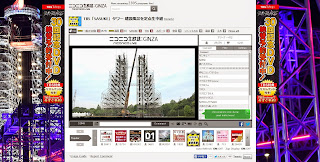 Sure enough, they weren't kidding!!! Just before the broadcast you had TBS posting on their twitter that they already started to build the base of the tower.  At the appointed time (11 am their time Saturday, 10 pm my time Friday night), a construction crew was hard at work building the tower. 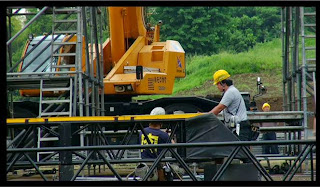 The broadcast lasted 4 hours!!!!!! Seriously.. 4 hours of construction!  LOL!!!  It was interesting to see how quickly they can build that thing  (between refreshing the page because friggin' Nico Nico always pimps their subscription service every minute.. ).  There were breaks in the broadcast where occasionally a ghost hand would show a portable white board with scribbled kanji I couldn't read.  Apparently it had trivia for those watching in chat.  Whenever the white board would appear everyone would laugh in chat. 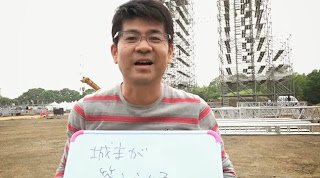 Finally about 3 1/2 hours in the broadcast, Sasuke Director Masato Inui 乾雅人 showed up. I mean he poked his head over the camera a couple of times but then all of a sudden I heard a voice and he shows up in front of the camera sitting on a chair while holding the white board. He proceeded to do an informal Q&A with the Nico Nico chat in his typical off the cuff fashion.  He literally read every line and occasional spat out answers right off the top of his head. 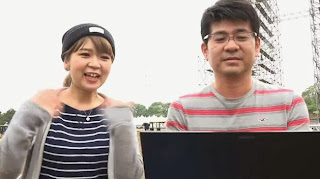 Halfway through the questions someone else showed up.  Those who don't remember her, she is the "Paper Girl" from the last Nico Nico broadcast. She was the lady that was holding up the paper with the obstacle contest submissions.  Seems her name is Yuka. 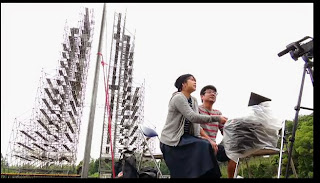 Side view of Yuka and Inui during the broadcast


Lost in Ube helped me a LOT by getting a general gist of what happened during the 20 minute Q&A session. Ube posted the synopsis on SMF and I'm cutting and pasting it here since I thought you guys would like to know.  Remember that these are just notes and not verbatim from skimming over the broadcast.


(This is a bit out of order:)
There will be six new "areas." No stages mentioned.
Yamada is not competing. It does look like there will be another Yamada-gundan though.
Inui is 50 years old.
He says that two SASUKEs a year is impossible.
There should be a SASUKE Park.
No Shinji Kobayashi.
Yuka-pi, aka Paper Girl, makes an appearance partway through.
Okuyama won't be there.
Yuka-pi is 30.
I'm not 100 percent sure but Inui says the theme for this show is gentenkaiki which would mean back to the basics.
All-Stars there: Takeda, Nagano, Shingo, Yamada-gundan (not Yamada).
No Kane.
No Bunpei due to "doctor stop."
Not sure which celebrities will be on the show. He'll know next week.
No Superman.
Looks like the next show will be four hours.
No Omori.
They can't/won't say when the airdate will be.
No Long Jump.
Inui thinks he can make it to, but not clear the Backstream.
No Hedgehog.
I believe there will be only one Soritatsu Kabe.
I'm sure I missed some stuff. 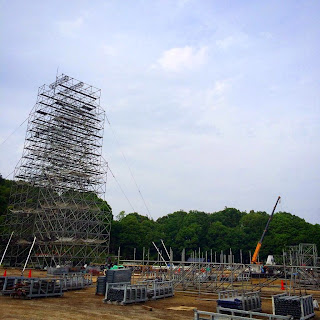 Thanks Ube! I'm happy we got anything at all so I'm really happy he got a quick rundown of some of the questions/answers.  Shame we won't see Bunpei though.. MEH.. the one time I'm in Japan and he won't be there.. I gave up ever meeting Akiyama. I'm just cursed. Oh well I honestly cannot complain. I've been very lucky in my Sasuke life. 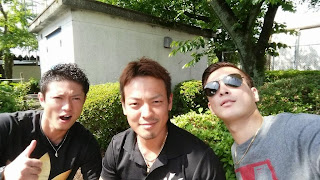 This is probably my last blog post before I leave. I have a couple busy days ahead of me so I may keep my Twitter updated but not my blog until I get back. If I get a chance and I'm not dog tired from the wicked jet-lag, then I may be able to post. Luckily the hotel has free wifi but again it depends how busy I am.  Twitter messages are short but blog posts with the compilation of photos and story takes time. I'm sure with the almost 2 month (expected but not confirmed) delay between taping and airing I'll have plenty of time to post more blogs on the trip. I plan to take video as well so I'll have those up on my Youtube Channel when I get back. In the meantime we are in countdown mode until taping day. I'm hoping that the both Inui and Sasuke TBS Twitter accounts will post regular updates for those eager to get a glimpse of the event. 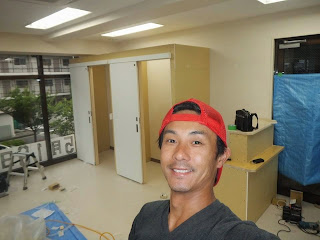 Oh! I almost forgot!  Remember waaaaaaaaaay back in 2013 that I mentioned that Shingo was opening a gym?  Well it's about to FINALLY happen! The place is called "Bariante". It's not exactly what he thinks it means but he should just do what Studio Ghibli did and just own the new word. It's supposed to open on Monday, May 18th!  I hope all goes well and I can see it when I get there later in the week.  I'll see you in a couple of weeks in time for another podcast and updates right before AnimeNext!
Posted by Arsenette at 1:27 AM

Anyone know if Asa and Shingo will be at SASUKE 31? I didn't see them on the list on SASUKE Maniac.

LOL William. Yes there will be a 2nd. Aahahahaha

Hey Carson! Sorry got back from Japan so I didn't see any updates while I was gone. Yes Asa and Shingo were there. SMF threw the names in Google and TBS made mistakes on their end as well. I'm sure once the actual competitor chart is posted with their photos then all the mistakes would have been fixed.

"There will be a SASUKE PARK"

As someone going to Japan a few days from now, this was my reaction to this: https://youtu.be/HXJTWEEi6BM?t=16

I'm glad I found your blog! I'll be watching Sasuke 31 during my trip there, especially now that they've teased about a 4th winner!

Sadly I don't expect a big park like last time. Things changed recently where they aren't investing much in the show at all. ( > . < ) I also don't know the location of the new one. It's all incredibly disappointing given how popular it was last year.

As for 31, I'm looking forward to seeing how they did the TV broadcast!

OK, since I'm just now catching up here (although I'm amazed I haven't gotten back to sleep like I said I would on SMF, LOL, and I'll probably just subscribe to the TY channel for the podcast and catch up later), re: Shingo finally-opening gym's name: I see that name, and all I can think of is Valiante from GARO; The Animation, the not-medieval Spain setting in that, which just amuses me because then I picture Shingo as a Makai Knight or Priest (grumbles at FUNi mistranslating that as Alchemist) and start giggling.

Yay, more Sasuke Park in some form, even if it isn't going to be as good as last year's. Hopefully, though, that's locked in and not going to be determined by how the ratings for 31 are (although the Nico Nico broadcast from today didn't seem to have a bad turnout, but then again I don't know what's considered good for those).