At long last the official date and online application for the inaugural Sasuke ASEAN Open Cup is announced!  Originally announced in February, 2013 (with a date for November, 2013) and then postponed in October, 2013 this mammoth event promises to usher a new era in Sasuke History.  First off.. I had a history/geography lesson about the tournament name.  I mistakenly called it Asian when it's actually ASEAN.  ASEAN stands for Association of Southeast Asian Nations.  As my history lesson (and wiki) continues, ASEAN is a geo-political and economic organization of ten countries located in Southeast Asia, which was formed on August, 1967.  The members are Indonesia, Malaysia, Singapore, the Philippines, Thailand, Brunei, Burma, Cambodia, Laos and Vietnam.  This event has been officially endorsed by the ASEAN Secretariat and Ministry of Foreign Affairs of Japan as part of the celebration of the 40th year of ASEAN-Japan Friendship and Cooperation. 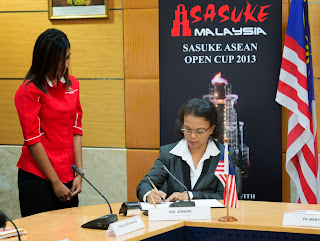 The Sasuke Sports Association Malaysia in conjunction with the Malaysian Ministry of Youth and Sports is excited to announce the first ever Sasuke ASEAN Open Cup, a new sporting event that brings the intense challenge of the world's most formidable obstacle course to the the world's masses. Experience Sasuke like you've never seen--or thought possible! Any and all physically fit athletes 18 years and older are welcome to register for the qualifiers. Come to Malaysia's Kelana Jaya Stadium and see what you are made of!

Japan and the ASEAN countries will also be sending their top athletes to compete in an international tournament on Feb. 24th. Which country reigns supreme on the courses? Be there to find out!

Registration for the Feb. 23rd 2014 Open Cup event is now open! Learn more and apply for your chance to qualify for the main event on the new official homepage:

This announcement was made on the Sasuke Malaysia Facebook.  An official website has been launched for the event.  It is hoped this will be a yearly event with all relevant information to be updated on that main website.  I assume that the newly created Sasuke ASEAN Open Cup 2014 Facebook will also have updates. 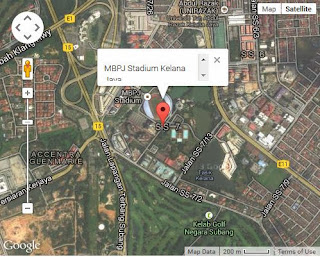 Location: Stadium MPPJ Kelana Jaya
Jalan SS 7/15
47301 Petaling Jaya, Selangor
Malaysia
Petaling Jaya Stadium is a multi-purpose stadium in the suburb of Kelana Jaya in Petaling Jaya, Malaysia. It is currently used mostly for football/soccer matches, and previously served as the home stadium to Selangor MPPJ. It was built in time for the 1998 Commonwealth Games, and hosted the Games' rugby matches. The stadium holds 25,000 people and opened in 1996. The stadium was called MPPJ Stadium then MBPJ Stadium before its name was changed to current name, Petaling Jaya Stadium (locals still call it the Stadium MPPJ Kelana Jaya due to it's physical location as evidenced by the event website). 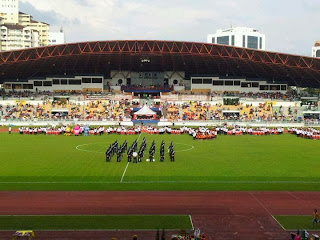 Google photo of inside the Kelana Jaya Stadium

This is the first time Sasuke will ever be held in a Stadium. Of note to those reading this post.  The event is a FOUR DAY EVENT.  There will be 2 days of qualifying. One day in particular is of note to those living outside the region.  The event is called "OPEN" for a reason.  All countries are welcome.

The ASEAN Open Cup invites athletes from around the world to compete in Sasuke Sports on a global scale. There will be two days for qualifiers followed by a pair of main event featuring 3 areas. The first day of the main event is for individuals while the second day is for teams.

Participants must be 18 years or older as of Feb. 1st 2014 and possess a level of physical fitness necessary to safely challenge a strenuous obstacle course. The competition is open to both sexes and all citizens of all countries.

The organizers define “healthy” as the following:
(a) Be physically fit and capable of doing a bare minimum of 20 push-ups and 10 pull-ups without resting.
(b) Not have any debilitating injuries or transmittable illness.

There is a registration fee of 60 Malaysian Ringgit (approx. $19 USD) to be paid via PayPal after your application has been accepted.

Accepted applicants will be notified via email by Jan. 20th 2014. 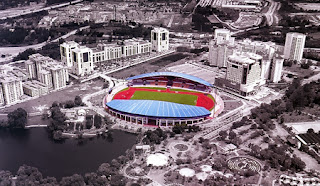 They mean it.  It is open to everyone including those outside of the region.  That is USA, Europe, South America, etc.  Open means open.  Obviously you will be responsible to get there on your own dime.  The organizers encourage you to send in your online application.  The way this is supposed to work is that 2 days of qualifying going into the 3rd day where the seeded competitors from the ASEAN/Japan go individually against those who went through qualifying.  Then the final day will be teams comprised of the results from the previous 3 days going head to head. Don't quote me on that as that might change but that's the general idea of how this is going to work. The event will not be televised per se but will be referenced in future Sasuke events (probably Navi) and used as promotional material for sponsors, promotion, etc for future events. It is expected at this time for the winning participants of the ASEAN event have an entry to Sasuke Japan. I'm not quite sure exactly how this will be handled but I'm sure this will be a small entry and not the old ANW 10 that marred the previous Sasuke events back when G4 had a lot of say.  This event is in cooperation with Sasuke Japan and TBS so it's the next best sanctioned event next to the rumored Ninja Warrior Europe.  I'm also assuming that this will change locations every so often but again don't quote me on that.  For those in the USA, this will not be sponsored by NBC as by now I'm sure NBC couldn't care less about Sasuke as they are preoccupied by ANW now.  It is evident by their lack of Sasuke programming in this country and lack of participation in the Sasuke Rising tournaments.  There is also a possibility that anyone officially tied to NBC's production of ANW will not be allowed to participate in this event due to conflict of interest.  Again, I'm sure all of that will be handled behind the scenes between the organizers and as such treated like any television-organized event subject to approval and sole discretion.

All in all I'm very happy this event is finally taking place and we know when this event will actually happen! I wish them well! I wish I could go.. but luck doesn't always follow me. LOL
Posted by Arsenette at 2:17 AM

It's good to see a new date for this and truly great news that it's open to the whole world .

Gonna rule myself out due to not thinking it would ever be possible to take part in a sasuke.

(So stopped training and ate instead got FAT)

Awwwwwwwwwww that sucks. Still though maybe a goal for next year's event? :)

(What the... I know I had started typing something, and it has vanished... weird.) Yes! Finally some good news about this. This now means that Morimoto can make any arrangements he needs for time off for this, or at least start to do so. I wonder when we'll hear about who else will be on the Japanese team.

I am semi-surprised at this point about no news about any possible TV airings of this anywhere. Considering how TBS hyped it, it would actually be a letdown for them not to air the actual international tournament. I would also be surprised if it didn't air in some form in Malaysia, simply because that's the host country and driving force behind this. Granted, I'm only semi-surprised because of how long it normally takes to find our potential airdates after a taping - it's more a surprise that TBS might only use footage of it in Navi and fluff pieces only because of how they hyped it in Sasuke 29.

Open to all countries!! Sweet now just to wait till I turn 18!

I wish the minimum age for the USA Sasuke would be 18, because I do not turn 21 until November.

Damn, February is too soon for me to make plans, and definitely too soon to get fit enough to complete. Hopefully they'll run it again in 2015.

But awesome that it's finally happening!