Airdate for ANW5 - Japan vs. USA 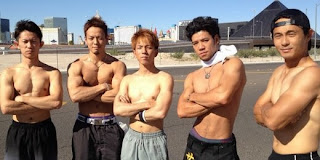 Shin Sedai (新世代) literally "New Generation"
(some call them the "New Stars" deriving from the Allstars)
2-Time Grand Champion Yuuji Urushihara 漆原裕治 (Cliffer #3), Hitoshi Kanno 菅野仁志, Ryo Matachi (Cliffer #2) 又地諒, Kazuma Asa 朝一眞 and Sasuke All-star Shingo Yamamoto 山本進悟
Las Vegas, Nevada Japan vs USA - ANW5 event.
Almost completely forgot since NBC forgot to announce this in the Fall when they promised.. the airdate for this event is finally listed!  Matt Iseman mentioned this a few days ago but I wanted to get a link from NBC.  I finally got it on the NBC/Universal website.
American Ninja Warrior Special: USA vs Japan
Monday, January 13 on NBC (8-10 p.m. ET)


"American Ninja Warrior" presents the first ever international competition as 'Team USA' battles against 'Team Japan' in an action-packed two-hour special, hosted by Matt Iseman and Akbar Gbaja Biamila with Jenn Brown co-hosting. Five top American competitors from “American Ninja Warrior” will compete against five of the most accomplished Japanese contenders from “Sasuke” in a high stakes battle for international dominance. Representing Team U.S.A. are Brian Arnold, Paul Kasemir, James McGrath, Travis Rosen and Brent Steffensen, who will compete against Team Japan’s Kazuma Asa, Hitoshi Kanno, Ryo Matachi, Shingo Yamamoto and two-time “Sasuke” Grand Champion Yuji Urushihara. Contestants will tackle all four stages of the Las Vegas “finals” course in a new head-to-head format that pits members from each team against one another. In the end, the championship trophy and international bragging rights will go to the victors in this inaugural U.S.A. vs. Japan contest. Matt Iseman and Akbar Gbaja Biamila host and Jenn Brown co-hosts. 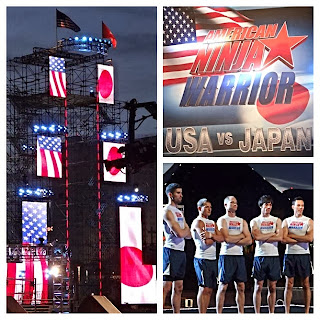 
So finally after a couple months delay we are getting the event aired on US Soil.  I posted a blog already introducing the event.  I also previewed the the Japan team if you wanted a refresher as to who the new Sasuke Stars appearing here.  Given the fact that it does include Sasuke competitors it's almost certain I will be blogging about this. I'm not a fan of the NBC presentation of Ninja Warrior but it should at least be worth it to watch the USA debut of the Japanese Sasuke stars on prime time network television.
Posted by Arsenette at 6:35 AM

Find it really cool .Itll be interesting to see if Japan will show it also

Guess I'm going to have to hurry up and buy a new TV and computer. I'm liking being unplugged a little too much. Time to rejoin humanity:-)

I can say that Japan won't be showing this. This is NBC's sole property.

LOL Snowy I'll be watching it after it aired.. just sayin' ;)

Rod here. Do you suppose showing the Japanese in primetime will help either Sasuke in Japan or the top athletes from Japan (in other words, if the ratings are good for this, would NBC dare expand their foray into non-American athletes in the future)?
I'm been so busy, glad to see you're keeping up with this. Happy holidays/merry Christmas, Arsenette.

One more thought? Since Japan can't see this, are Japan fans asking for the favor in return to streaming this somehow back to Japan? If nothing else, Lost In Ube should be a part of this, if nothing else for his running commentary.
Thanks again for everything, Arsenette.

Hey Rod! Don't worry comment moderation also takes time to put up since I have to approve things. Thanks for your patience on that! I forgot to check in and hit the "publish" on them.. nyuurrrr

Doubtful NBC wants anything to do with Japan other than whore off it's success.. sorry.. I have no love lost on NBC anymore. I doubt they will ever want a connection with Sasuke Japan when they have the cash cow that is ANW now.

You know the usual suspects will have this recorded. At worst those who ask will be able to see it. I doubt they are as organized to see it streamed though. I thought us maniacs were the only ones doing that. Who knows though? I don't take care of that stuff. I'll be watching post as well as I don't have recording capabilities myself. I will be blogging about it though since it has the Japanese in there... I.. personally don't like the NBC presentation. It's a matter of taste for me.

R u going to post a spoilerific review for this?

Hello! Yes I'd like to. Even though I'm not too keen on NBC's presentation it will have the Japanese stars so I'll be doing a review on it when I get a copy of it to get screenshots from it.

Have you met any of them in person or all over IM?
BTW I LOVE your blog. Every morning I wake up and click my favorite section. YouTube, Google, and Rambling Rican. I have seen basically all of your post and love your commentary. Keep making these. PLEASE.

Also, if Sasuke 30 is the last Sasuke, will you still blog about Makoto Nagano and Shingo Yamamoto etc.

I'll keep blogging so long as Sasuke Japan is around. I'm keeping hopeful with new information I've been receiving. Thanks!