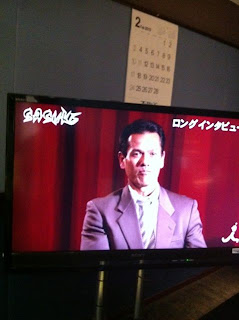 
It's been a while since the airing of Sasuke 28 in Japan, however that doesn't mean that there is no more Sasuke news.  Sasuke Director Masato Inui posted this gem of a snapshot on his twitter page the other day.  It shows Sasuke All-Star (Mr. Sasuke) Katsumi Yamada 山田勝己 seemingly doing a speech during that (horrid) celebrity room during Sasuke Rising's Japan airing.  Seems Inui is editing something together that's coming up soon™.  I asked him what and when (and so did everyone else LOL) and it seems it's coming up but no date has been set for airing. You know if I find out I'll let you know!  We are still awaiting confirmation (and subsequent announcement) of a new Sasuke 29 that is being discussed, however in the meantime.. 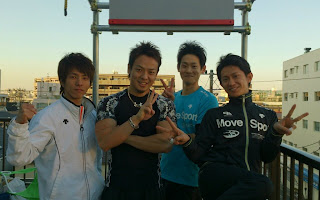 While we are on hiatus it's fun to catch up with the world of the Sasuke competitors!  During the same week of the Katsumi photo we had a few twitter conversations and photos of a get together with the New Generation.  Inui posted another variation of that photo that is featured above. (I liked Kanno's version better :p although Ryo has a great one too! )  Anyway it seems that Inui met with them for something they were taping for TBS. Possibly tied to the Katsumi screenshot?  Who knows at this point.  What I DO like .. is that it seems Kouji is being featured along with the rest of the New Generation that he was originally a part of. Hopefully he's no longer demoted!  Only time will tell. As far as I'm concerned he is still part of that group! Oh and as far as location that is the same one that Ryo posted back in December when he built the Crazy Cliffhanger クレイジークリフハンガー and tested it out on video. 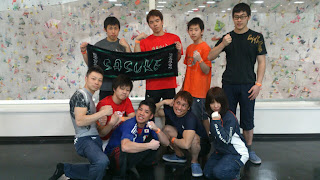 
In the absence of Asa on twitter, I was happy to see a picture of him meeting up with Sasuke fans. Long-time Sasuke Fan aokinagano whom I follow on twitter posted this photo of him meeting Asa along with a few other fans.  It's nice to see get a together like this! I hope that's a trend for the future. 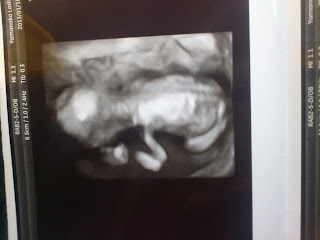 Meanwhile I can't believe I didn't mention this earlier.. We are getting a new addition to the Sasuke All-Star Family! Sasuke Legend Makoto Nagano 長野誠 's wife Asami 阿紗 美 posted on her Facebook back in January that she is expecting another child!  As you know the couple have a 3 year old son named Kaiou 塊王.  We don't know the sex of the child yet (at least it hasn't been posted) although we have a preliminary due date of July 6, 2013!  Prayers for a safe term and delivery!  We are anxious to meet the new chibi-Nagano! ( ^ . ^ ) 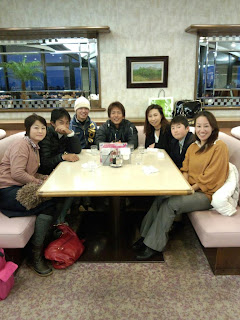 
Meanwhile I decided to dedicate this last section to Sasuke All-Star Shingo Yamamoto 山本進悟 and his prolific use of Facebook.. LOL  Okay.. long story short is that he posts a LOT of photos. What's funny is that I'm not even a fan of Facebook, nor do I have an account.. however I'm very happy for the Sasuke community for keeping me apprised of all things Sasuke including Shingo's ever growing library of photos!  Since Shingo's retirement from the gasoline industry back in November (or was it October?) he's been doing traveling (something he never had a chance to do with the long hours at the gas stations he ran).  During the past couple of months he's visited many other Sasuke competitors including the Nagano's in Miyazaki Prefecture. So by this point we knew Asami was pregnant so what do they do in their spare time with pregnant wife and toddler in tow?  Why.. race boats through a steep canyon of course! LOL  Of course Shingo's lack of coordination almost mowed down a family of ducks and almost rammed into a rock-face.. and another boat... but hey it's all in fun! 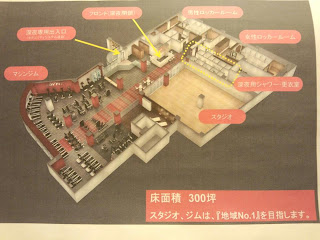 
Oh yeah.. before I forget.  The big question of what will Shingo do now that he's retired at the ripe age of 38?  Why open a gym of course!  Shingo announced his project of opening a gym in Tokyo (I think it's in Tokyo.. have to confirm that at a later date).  Above is the concept photo of the whole thing while another concept picture of what it will look like inside.  Projected completion of the project is sometime between August-October, 2013.  I'm so happy for him!  Looking forward to more updates on that brand new venture! 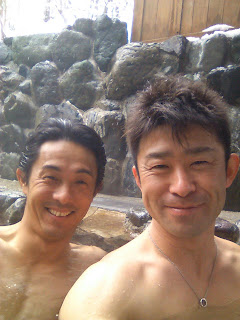 
Yeah.. okay.. uhm.. remember that Shingo is prolific with Facebook? Seems Takeda is getting into the action lately (his account is only a couple months old).  Well.. difficult to explain but seems they have waaaaaaaaaay too much fun when they get together judging by the latest photos (and comments of other .. er.. photos).. seems Takeda is into posting NSFW photos of himself on Facebook.. okay.. just one.. but nekkid is still nekkid.  Either way the tame one is above of Shingo and Takeda chilling at an onsen just last week in Gifu Prefecture.  Shingo posted a few of his own.. oh you just have to see it later.. I'm not posting them here. If you are interested in keeping up with the ever changing world of the All-stars the links to the Facebook pages are on each of the copyrights. 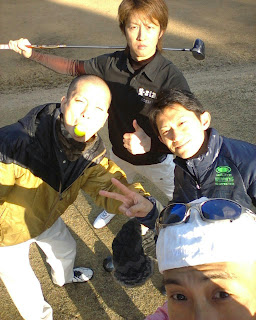 
Meanwhile Shingo's tour of Sasuke across Japan continues in Chiba Prefecture as these long-time friends go golfing.. oh yeah.. Shingo is an avid golfer.. I'd say more than half of his photos involve golf in some way.. just saying... Anyway Shingo posing pics with Sasuke competitors is a constant theme. Oh yeah and for those who don't remember Masashi Hioki 日置 将士 we know him as the lucky bastard that got Bunpei at his wedding. And of course Kawaguchi is another STQ'er! 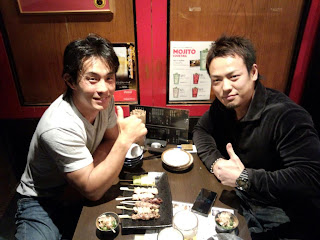 
And just recently he posted this photo with Kanno. He meets up with his crew a few times during the year since they all live in neighboring prefectures.  I love how fellow Final Stage competitors meet up on their own. Sasuke has really become one large family!  That's why I love Sasuke!
Posted by Arsenette at 10:13 AM

2. (makes mental note to check out Takeda's Facebook while at my friend's house this weekend, as she likes Sasuke also and I'm sure as heck not looking for a certain pic at work, although, dude, don't do that to Sasuke fangirls because that's just too much to ponder...)

Aahahah yeah on Shingo. I like how open he is with what he posts. It's so unlike anyone I've ever seen.. then.. there's Takeda.. yeah.. I posted NSFW on purpose.. he's stark nekkid.. so yeah.. granted it's his backside but I didn't want to post that. His page is enough LOL

Great update. You are one hardcore Sasuke follower! :)

OK, having now looked at both Takeda and Shingo's Facebook pics while at my friend's house, we both would like to thank you for sharing the information of their existence and for more proof that Shingo really has too much free time right now. Also... damn, there was snow at the onsen, don't be posing nekkid up there even if we do appreciate it.

Also, yay for Kouji's possible reinstatement into the Shin Sedai! I kept forgetting to post this, but I wonder of his original demotion was in part because his job is one that you would expect him to be able to do well at Sasuke, contrary to the concept of the All Stars being normal guys doing well - if TBS are trying to promote the Shin Sedai that way as well, Kouji might not be suited to that idea. If that's the case, though, it was still a bad idea to demote him - and I wonder if fan backlash might have gotten him reinstated.

LOL about the sharing the er.. NSFW pics with someone! I didn't want to show them here but figured a few would get the hint to find them on their pages. LOL I wouldn't dare take a pic like that.. even if I had the body.. LOL But worse if it was FRIGGIN' cold.. I mean.. if you look at his.. er.. clenched.. you know.. wasn't he totally freezing to have them so.. clenched? LMFAO...