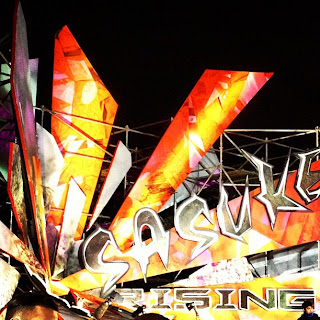 
As was discussed before, Sasuke 28 was FINALLY taping this month in Japan.  Taping took place over the weekend (Sunday, November 18 at Midoriyama Studios).  After a long 16 month wait we finally have a new tournament! 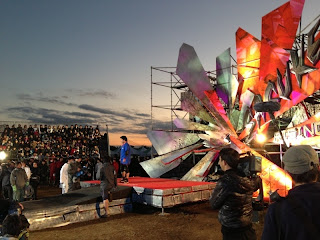 
The new tournament is now officially called "Sasuke Rising" (but for all of us it's Sasuke 28 by chronological order).  This is the last tournament for the Sasuke All-Stars.  5 of the 6 Sasuke All-stars were scheduled to compete (Shiratori being the only one not competing). 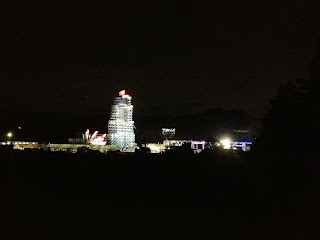 Sasuke Rising lit up at night (image from the road)

The weather cooperated but the previous week and even day before (Saturday) were all soggy and cold with long bouts of rain.  Expect when the broadcast airs this tournament next month there will be a LOT lot of mud.. and everyone in coats!  Still, I'm so happy it finally taped! 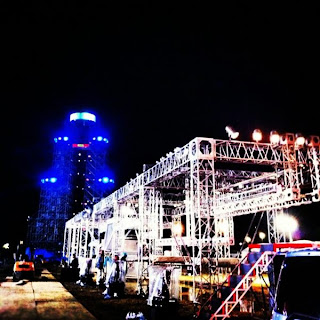 Initial information that Lost in Ube has found is an airing on December 27, 2012 on TBS (Japan). Seems to be a 3 1/2 hour show (which IMO is the perfect length..). As the date gets closer and we know the dates of the Navi (preshow) and any other specials (if any) I'll post a blog post just on the airdate information. 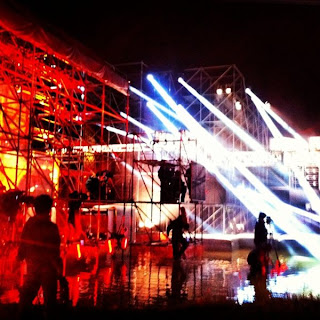 For the international viewers we have no idea if we will ever see this tournament air.  Since G4TV is no longer in existence at the end of this year it is still unclear if Sasuke will ever be shown and subsequently sold worldwide. :(
Posted by Arsenette at 9:29 AM

I like the rising motif on the old Sasuke logo. Phoenix rising image?

I guess that is what they were going for? I personally don't like it (to me it looks like vomit.. LOL) but there are quite a few that do. So long as there was a tourney I honestly don't care what the start-line looks like.. theheehehhe

I wonder how much they modified the stages?

Oh man. This just made my week! They filmed on my birthday - too perfect! Needless to say, we're all itching for the date ... while it might not air on G4, we're keeping our eyes open for torrents: please let us know if you find a copy of SASUKE 28 online - would be much appreciated!

Oh man - they filmed on my birthday! This just made my month! Needless to say, we're all itching to see that glorious 3.5 hour run, and while we might not have G4 anymore, we're keeping an eye out for any versions that we can find online - please let us know if you're able to find and/or share a copy!

Hey Mchiii :) All that stuff will be on SMF.. so hard to keep up with it. I let all the kids take care of that LOL

Still though I plan on watching everything Sasuke I can get my hands on. mwahahahahhaha

I may never get to see it ( really hope I do ). But to be honest I'm just happy that they got one last try at it and the send off they deserve .