Edit 3/30/11: Added Poster Ube found for me! Also the actual website information with times for Sasuke Corner.
Edit: 4/1/11: Added message from Nagano regarding the proceeds to this year's Maguro Festival. 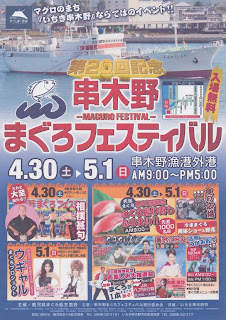 第20回串木野まぐろフェスティバル Poster ©Ichikikushikino City
It's been a stressful month in Japan with the 9.0 Great East Japan Earthquake and ensuing tsunami. I updated a page with the status of the Sasuke competitors we know and how they are doing. Granted it's difficult getting personal information out of non-celebrities so it's being updated as I get information. In the meantime with no news of Sasuke on the horizon given that they have more pressing issues to deal with.. we do have a local event in the south of Japan (away from the devastated areas) where I have been keeping up with for the better part of 3 years to keep me preoccupied. Previous blogs on this event (2010 Here) (2009 - one with pictures and one with video) - and 2008 (Part 1 and Part 2 from Sasuke Maniac coverage). 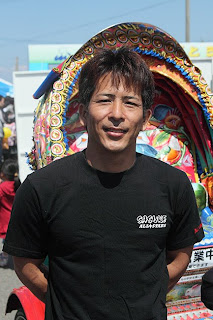 All-Star Makoto Nagano 長野誠 during the 19th Annual Maguro Festival (2010) in Kagoshima Prefecture ©ButterflyLife
The 20th Annual Maguro Festival 第20回串木野まぐろフェスティバル will take place later this month in Kagoshima Prefecture on Saturday April 30 and Sunday May 1, 2011 in the city of Kushikino. Prefecture event website here. This is a local Tuna event for the port city of Kushikino. It's pretty much a county fair including games for kids, music, food and other activities for the whole family. The past few years the company Nagano works for, Takasui Corp. has participated in the event (since they also use this fishing port) and during that time they had Nagano design and build a Sasuke set where he could demonstrate his skills along with a few of his friends to the local crowd. 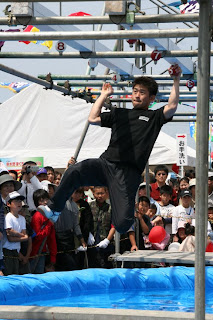 This year Nagano was able to send me a list of invites going to this year's event in April.

I and Takeda and Yamamoto and Yamada participate this year.
今年は、私と竹田さんと、山本さんと、山田さんが参加します。

So this time there will be a total of 4 All-Stars in the Maguro Festival. All-Star Makoto Nagano 長野誠 (of course who will be host of this since it's his prefecture and his company sponsoring the Sasuke obstacle course), All-Star Toshihiro Takeda 竹田敏浩, All-Star Shingo Yamamoto 山本進悟 and Mr. Sasuke All-Star Katsumi Yamada 山田勝己. Obviously these names are subject to change, etc. etc. (you know the drill) as with all events of this nature. If anything changes I'll let you know. 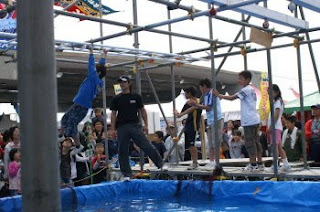 Usually they have 2 demonstrations they do (there are a few videos of what it looks like in the previous blogs I listed) a day and they do it on both days for a total of 4 demonstrations.

Edit: Thanks to Ube from Lost in Ube for finding the website information for me (which was buried in the city website... ) there is an exact time for the demonstrations..

They will again have 2 demonstrations each day. One in the late morning and again in early afternoon on both days. 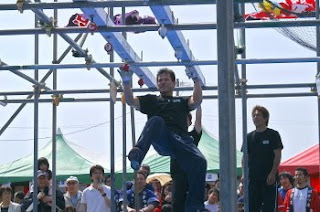 Hopefully they will get a good crowd this year since it's been a difficult year for Japan in general. Hopefully this will boost their local economy. I hope to get pictures and videos again this year. It's the little Sasuke I get between tournaments!

Edit: 4/1/11 - Nagano's site was updated with a message regarding the status of everyone after the Earthquake/Tsunami. He also stated that they are going to be doing Disaster relief fund-raising at the event as well during the Maguro Festival (both days).
Posted by Arsenette at 10:57 PM

This is a nice vijest.Nadam there will be any trouble in Japan turned away, and we loyal-Sasuke competitors enjoy the new season.
Thanks for the notification

I hope takeda makes it after what he has had to deal with in the north. He could do with some time off to hang out with his friends and just muck about. It will be good for them all to just have some fun even for just a few hours