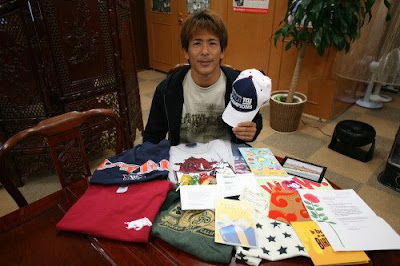 Update: August 25, 2008
Thank you Merimask and Noriaki for you help with this translation
"I received a lot of birthday gifts and messages from fans at home and abroad around my birthday, March 30. Thank you very much indeed."

"Mr. Nagano's language is very polite and simple, and not friendly (It's "formal"). I think it reflects his good personality very well. I intentionally omitted to add an exclamation point at the end, being afraid that that might result in a too friendly translation for him. I don't mean he is cold. He is just polite. And I think it's a goodcharacter of his."
Google Translation:
My birthday is March 30, at home and abroad about gifts and congratulatory messages from many fine. Thank you very much indeed.
Bablefish Translation:
The large quantity receiving the present and the message which are celebration from the domestic on approximately my birthday March 30th. Thank you truly.
First and foremost it cracks me up (the translation parts from bablefish and google) but also really really really warms the heart. Back in early January I got the strange idea if a bunch of us got together to get Nagano a birthday present and send it to his company (since we didn't have another address and others have used that before to give him fanmail).. so, one of us was designated as the person (thanks Tricia!) to send things to and she put it in a BIG box and mailed it to Nagano for his birthday. We figured he got it but it wasn't until today that we find out that yes he did! Not only that.. he was stunned! Back in April he had done a Radio interview (of which I could only understand a word here and there) and noticed that the comments section was growing underneath on the website. Using my trusty translation a few Japanese fans noted that they were happy that he got a "Birth celebration mail" from fans from overseas. 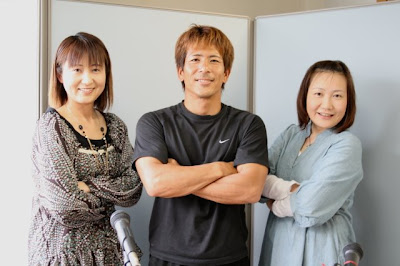 Dude loves Ms. Clairol this HAS to be brightest I've seen him dye his hair! Still, he looks healthier than he has in a long time. Glad he's recouping! (Picture taken the day before the Maguro Festival) (picture © yodaraji)
I wasn't sure if it was us but when I opened up his official website there it was! We quickly got online and even called each other to verify (so do you see your gift?) and lo and behold all the contents of the box were there across the table (and in his hand - yes Nutz4Nagano it's your hat! Yay!) We each did our roll call .. okay top one.. ah okay Pamwax got him that.. okay.. mickster got him that.. and that.. and that.. oh Tricia you got him that and that.. oh! There's my shirt! (mine is top right - a slate blue shirt with the United States Flag across the front with the words United States across the top of the flag), I see hhollyd's calendar, Oh is that loriwiz' Irish shirt? Bunnyhere got him a card (we all had our names on) and a get well card for when he was in the hospital for just under a month.
All in all I'm floored. Not because our plan worked but because he liked it :) I mean.. this is a guy in another country.. and we are complete strangers.. I am surprised no one has done this before but ultimately I'm happy he was happy for his birthday. We do know there were more sent to him afterwards that didn't make the photo and I want to point that out. He didn't have to do a big photo like this on his site thanking us. I mean dude looks like he either needs a beer.. or a shave, a hot shower and some sleep.. he's had a horrid first part of the year and it affected him in Sasuke 20. Then after that he had to continue working, organizing his section in the Maguro festival and then go back to work.. poor guy. I'm glad at least we all know it put a smile on his face :)
Now I'm really looking forward to the Sasuke Maniac this Sunday. It's supposedly about the Maguro Festival!
Update: August 25, 2008
Thank you Merimask and Noriaki for you help with this translation
We finally got an actual translation and description of those 2 sentences and finally it makes sense to see that this is a formal reply. Formal or not... I adored that he posed with the gifts considering that he did acknowledge having more than was shown (and I know for a fact he got more than was in that box). So still.. I'm giddy :)
Posted by Arsenette at 12:13 AM

P.S. Actually, you and a few people simultaneously came up with the idea to send Nagano some birthday gifts.

Actually yes and that was quite delightful! Having fun knowing people's tastes in things and just the fun of getting everything together was really a treat! It wasn't until after it went rolling that I realized that it wasn't done before - at least I dont' think which is why I wrote it that way. I'm sure he's gotten presents before and that's evident by some of the T-Shirts he wears (particularly that one from New Mexico which got serious mileage this winter LOL). Other coordinated things happened in the past (the autographs thing comes to mind). I hope next year someone fixes the Chocolate/Shortcake shortage he apparently had this year for Valentine's Day next year LOL. :) Poor thing.. what do you mean he didn't get chocolates? You HAVE to have chocolate for Valentine's Day!

Great post Elsie. We've got pretty good teamwork when it comes to a Makoto project. I see great things in his future........I'd like to think he made the display of everything but by his haggard look, someone at the company did it for him. Still, what a great thing for him to acknowledge our gifts.

Despite the company doing it for him he still bothered to take the picture and put it online.. AND take time to mention it in an interview. Considering we KNOW he got more presents in the past and since the picture taking (B included) it was the first time I've even heard him mention the fact he got birthday gifts abroad. I've actually never heard a celebrity make note of something to this nature. So yes I'm tickled pink :)

Great post Elsie. It is fun to know that he got our stuff. Maybe we will see him wearing one of our t-shirts. I would like to see him in Mick's tank with all the stars.

I loved the sheer variety of T-shirts :) NONE of them Black! Yeah that white with stars is just cool looking.

Pitts he got your pretzels I'm sure! No way something that yummy would have survived long in the hands of a guy LOL

Updated the translation we got this weekend :)