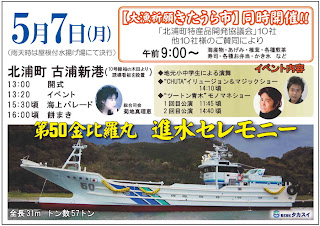 Official announcement poster of the Launch Ceremony for  the 50th Konpiramaru ©Takasui Corp.


As I mentioned before a few times the official launching ceremony for the brand new ship of All-Star Makoto Nagano 長野誠 - the 50th Konpiramaru took place on Monday, May 7, 2012 in the harbor  Kitaura (a town that was absorbed by the city of Nobeoka) in Miyazaki Prefecture. For those who remember, this is actually Nagano's hometown where he was born and raised. 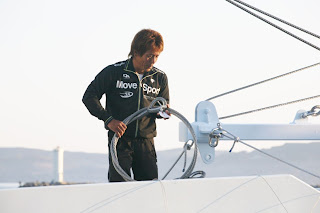 All-Star Makoto Nagano 長野誠 getting final preparations done on the 50th Konpiramaru just before he headed out to the Maguro Festival - April 28, 2012 ©Takasui Corp.


(btw.. take a drink.. he's got Descente gear on...) Also as I mentioned before, this is his brand new replacement for the 28th Konpiramaru.  Unlike the 28th which was given to him from a previous captain, the 50th Konpiramaru is a state of the art and completely brand new ship.  Nagano has spent the past few months getting special certifications just to be able to run this ship.  Also just like the 28th, the 50th will be a part of the Takasui Fleet. 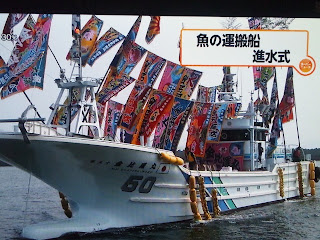 
The name of the Ship is the 50th Konpiramaru 第50金比羅丸 and in the past I have said that the 28th is the age of the Captain of the ship. I was correct in one way. The previous Ship Nagano was a captain of (the 28th) had a previous captain.  That part I wasn't aware of until recently. That previous captain was 28 years old when he got that ship so in honor of him Nagano kept the number on the ship when he took over as Captain. This new one "50" was chosen by Nagano for his new ship. 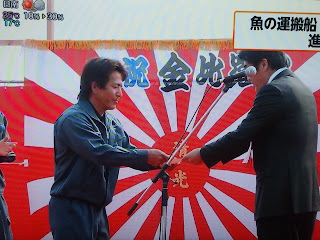 The #50 is the age of his boss Mr. Takasu who is pictured above (on the right). He did it as a tribute to him. He's very close to him. So close that G4 confused him for his father in  the Ninja Warrior edited version of Sasuke 17.  It pains me that to this day a great number of people think that Mr. Takasu is his father thanks to the stupidity of G4 and their horrible  and often incorrect subtitles to Ninja Warrior.  It's an amazing screw up considering that they are only 10 years apart.. but.. I'm digressing aren't I?  Either way for those who are curious, his father passed away this time last year at the age of 79. 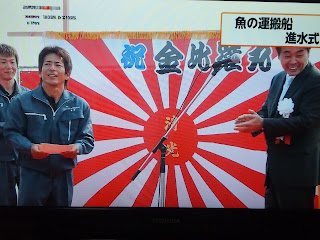 
Thanks to Kotetu (who was also the same person who took photos of the last 2 Maguro Festivals) I had some inkling as to what happened.  The pics above were from the local television station broadcasting the celebration at the docks. 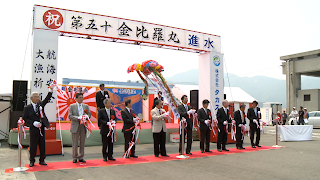 
The event itself went on all day.  The first pic of this entire post had the schedule for the ceremonies.  The pic above was the ribbon cutting ceremony. Seems there were a lot of dignitaries and corporate people on hand.  No idea outside of Takasui Corp and crew were on hand. 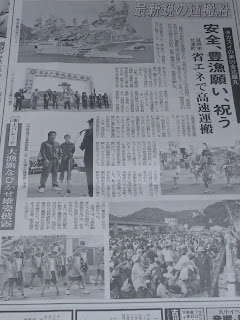 
The ship itself is a LOT bigger than the original 28th.  It displaces almost 3 times the amount as the previous and can carry a lot more not just in physical size.  It's 31 meters long (102 feet long) and displaces 57 tons.  Given that the 28th was the smallest ship in the fleet, it's moved up in sizing compared to the existing ships in the Takasui Fleet.  That said, I'm unsure if anything (other than being able to carry more) is changing with his duties/role within the Takasui fishing fleet/operations. 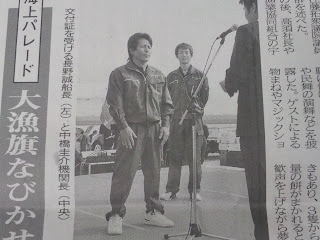 Not sure if his role will change honestly but given the past history as to what ships did what it makes me think he's up the chain a bit. Or.. same position hauling more fish? The displacement on the ship is literally THREE times the other 2 ships he was ranked with. The fact that he can carry more than the 2 ships combined makes me think that he's higher up the chain and expected to do something else. I went over the video of what his fleet does and either they are leaving him out there longer or having him do less trips back to port to offload ship. Dunno yet. 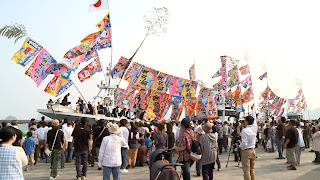 End of Ceremony and celebration with the crowd begins ©0982.tv

Overall everyone is working the same amount of time regardless that the size of ship Nagano is Captain of has changed. They still fish 25 days (rough average) straight a month and 5 days off year round (this is by the way how they calculate his working 300 days out of the year). The only difference is where they sleep. Sometimes the big blue ship stays out all day and night once they found where they are going to fish. The others come back to port, sleep, then go back out the following evening... basically leaving the blue ship to stake their territory to keep other rival companies from taking their fish. That's my understanding of it anyway. I just knew that Nagano's ship would go back and forth jostling for position to take back fish back to port. Each ship would be paid according to what they hauled back so competition for the chase boats have gotten intense. Only time will tell if his role in the fleet changed. 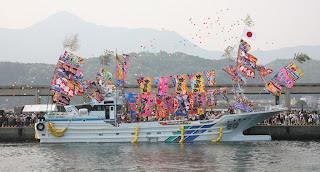 View from the other side of celebration ©Takasui Corp


Nice to see a nice crowd on hand for the celebrations. The weather actually cooperated!  I'm unsure what all of the banners mean other than good luck in fishing, good catch, etc. well wishes. Some say his name, some say the company name, etc. etc.  I'm told this is pretty standard fare for those banners on the ships. 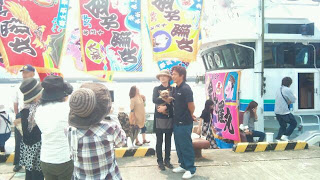 
Hopefully when Sasuke 28 rolls around there is a nice segment of Nagano becoming Captain of a new ship! I'd love to see more videos of it. 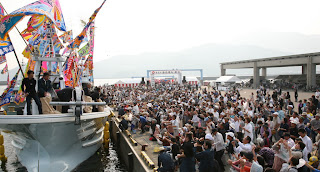 Thanks to those who helped me out in getting pictures and directing me to videos!  It's a shame they didn't last long on the websites or I would have linked them in this article.  Either way, next up on the agenda is Sasuke Malaysia 2 in about 2 weeks and then Sasuke Singapore a couple weeks after that!  Hope some Japanese Sasuke Stars are invited to that!
Posted by Arsenette at 12:09 AM

As always amazed by the information you get and piece together to make this wonderful blog. Thank you