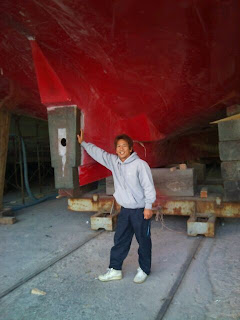 Allstar - Makoto Nagano 長野誠 - Kagoshima, December, 2011 ©Takasui Corp.
It's been a while since I updated the blog due to health reasons and just recently my video card frying.... Anyway I'm doing a bit better but not 100% by any means but I'm back up and running on my computer. Thanks to some friggin' awesome friends I've got a new computer. In the meantime I've have been getting inundated with questions.. especially given the content of my most recent blog entry about Monster 9 going Bankrupt.. Just wanted to do a quick update on what we know so far. For the record.. much of what is going on now in Sasuke-land is rumor so until we know for sure I'm refraining from posting rumors. Albeit the current rumors are actually positive for Sasuke.. I know everyone is anxious about what's going on but there is very little official information to be had recently. I ask everyone be a bit more patient. What I will post is what we know so far officially. 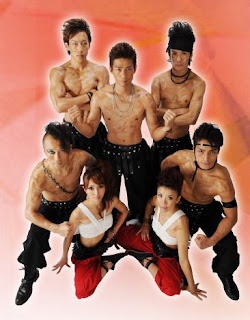 Founding members of Samurai Rock Orchestra ©SRO
In the meantime with Monster 9 facing full liquidation this directly impacts the fate of all Muscle Musical members as they are instantly unemployed. Remember they were a creation of Monster 9 and were not co-owned by anyone else (unlike Sasuke which was co-owned by TBS in distribution). That said.. seems the members are finding new lives creating other employment opportunities now that Muscle Musical マッスルミュージカル is now defunct. For those who remember co-World Record holder in Monster Box Naoki Iketani 池谷直樹 (he's in the center and creator of SRO) it seems life after Muscle Musical means creating a show called Samurai Rock Orchestra (SRO). Six other former Muscle Musical members have joined with Naoki in this venture which debuts in Japan on March, 2012. Complete information can be found on their website. Please remember it's still under construction and they are still auditioning members to fill out the cast. 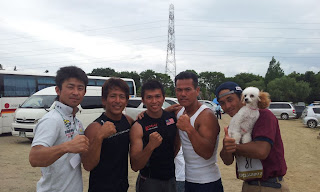 In the meantime I'm finally able to do my blog for Farid Isham. Questions have been sent to him (today in fact) and I should get this done fairly soon. Given the amount I sent him though it might be next year.. don't fret though.. it's on it's way!
Posted by Arsenette at 3:23 AM

As always thanks for the update.glad you are feeling a bit better. Merry Christmas and a happy new year

Thanks and Merry Christmas and Happy New Year as well! :) Just mental note.. get checked often.. to avoid surgery.. LOL

Get well soon, thoughts and prayers. We understand the delay. Rod

Thanks guys :) Though I wish I had more to post about.. this waiting suuuuuuuuuucks :p