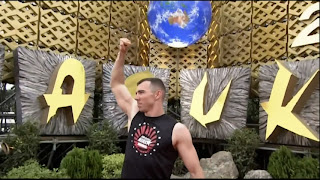 As I mentioned in a previous blog.. ANW 3 aired last night on NBC. We'll see what the ratings are tomorrow afternoon (edit: Last in ratings for the networks.. ). I won't be blogging about the broadcast I'm waiting to blog the entire broadcast when it finally airs on TBS in Japan. I didn't do it in Sasuke 23 or Sasuke 26.. so I won't be doing it in Sasuke 27. :p 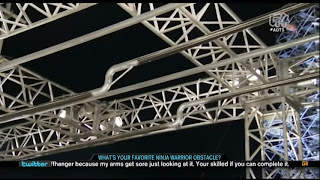 Oh.. someone likes Sim Sasuke.. so much so they stole obstacles from it.. LOL!! Supersheep! Demand royalties! LOL ©screenshot from ANW3

Speaking of it seems that the possible airdate for Sasuke 27 is Monday, October 3, 2011 at 7 PM JST. Mental note that this is a rumored date and is not official until TBS officially announces it on their page. So far this is the probable date so at least we have a heads up that we have more than a month wait.. again.. for Sasuke 27. 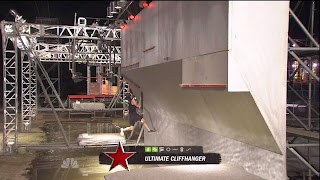 UCH is back! ©Screenshot from ANW3

Once we get a final official airdate I'll update the page with the full information which usually includes a list of probable competitors, etc. It's going to be a looooooooooong wait for the FULL tournament Sasuke 27.. especially with 10 results already aired and circling the globe as we speak /facepalm
Posted by Arsenette at 3:25 AM

I was on the edge of my seat!

Well, at least we got to see the obstacles that haven't been crossed yet in stage 3, even if it was quite fast. Assuming I didn't miss anything in the first 10-15 minutes, my concerns of the general audience trying to pick the ANW concept blindly, especially with no real hint of Japanese competitors, let alone audience for a context, came true I'm not surprised at all, just disappointed.

The real surprise is the story on ratings being the best in 7 weeks in the "key demographics" of that time slot despite the headline:

More people watched the last 1/2 hour than the first. It was worth watching still, but only as a die hard fan, and definitely left wanting for a LOT more. Maybe the key demographics will convince them to keep doing it, but please, NBC, make it better. I hope they don't assume (and likely are) that this so "Americanized" version is the way it should stay (but even neglecting to mention previous American competitors before the ANW brand was unfortunate).

One other question: would it have been any different ratings wise if Levi or Brian Orosco had made it?

Actually unsure about having Levi and Brian. That's been a sore point of mine. If you are any other country but USA you get an automatic invite you passed stage 1 before. By that alone you had a handful of guys that had no business being forced to go back to trials. Period. I am of the opinion that everyone should be treated equally. That said unsure how it would have affected ratings honestly. ANW is not watched at all.. at it's peak it held a 0.1 rating with less than 233k watching at once.. compared to the NBC numbers.. most people wouldn't even know WHO they are and the ones that did .. were watching. Others boycotted the episode waiting instead for the TBS official broadcast. There's a LOT of people I know that fit in that category.

Thanks for the article I'll read it shortly. There's a lot of updated numbers I need to catch up with. Still toying with the idea of doing an in depth analysis on the ratings of last night.

LOL P.S. Look at the "source".. NBC wrote that press release.. LOL No wonder there was spin on it.. the best they could say was that the last time they had good ratings it was almost 2 months ago so based on that they were boosted..

Thanks for keeping us up to date with Sasuke/Ninja Warrior. This blog is the only place I trust to hear real information about the show, and not just corporate spin. It has been very depressing to hear about how the show has consistently taken a turn for the worse, (thanks for that, NBC/Comcast/G4) but at least I know what to expect.

ANW is trash and it shows how "Americanizing" a show usually means it becomes garbage. Years back, I used to watch G4 almost every day. (You know, back when it wasn't Cops & Cheaters 22 hours a day) Now, I only tune in to watch new seasons of Sasuke/Ninja Warrior, and even then the content is very poorly edited and many competitors are fast-forwarded or taken out all together (for ANW).

Anyway, thanks again, and hopefully some miracle will occur to bring Sasuke back to its former glory. (or maybe it can just die now before Comcast bastardizes it any more)

So, it was the NBC press release--I didn't look closely enough. My bad. Well, that explains the positive spin. I saw two other articles, but the NYT blog looked like it read off the press release.

The only other thought would be if any of the competitors from other countries are allowed to hint at how it was having the American competitors around without breaking confidentiality. I'm curious as to Nagano, Lee, as well as the audience there truly reacted to the Americans, because they give the appearnace of being isolated (maybe for the cameras, but I would think people like David Campbell wouldn't want to be isolated from the other non-American competitors, right?).

By the way, thanks for what you've done on the multiple forums (including G4), and for trying for the DVD (I signed the petition, but I'm assuming no new news is bad news).

The American corporate take over of the show definitely is sad. However, I have to conceive I would have NEVER heard of Ninja Warrior/Sasuke if hadn't been on G4 (I started watching when it first started airing on G4 years back). I imagine that's true for other people. One can damn G4 for altering the show over time, but in effect, it's biting the hand that feeds you. No G4 would have equaled no Sasuke for me.

I hope the airdate is on the 4 of october because I can't wait any longer I just hope nagano did well in sasuke 27 maybe make it to the third stage :)

Arsenette, if you think posting this will cause more trouble to you or the YouTube user, don't post this, but there has been a YouTube channel showing the Sasuke videos in long clips. Given the copyright issues, I'm surprised that it's been up for a few years, but it's got a lot of clips. It might be worthwhile in the meantime, and the person says they're from Spain:
http://www.youtube.com/user/77TwiNe77
If you think it's worthwhile (realizing the legal issues), you could put in the Sasuke links. Otherwise, ignore this.

I'm sure they know about it by now since it's been cross linked out the wazzu for the past year so I don't mind posting this message of yours :) I won't put it on the links section though but keep this here as the comment. I think at this stage people know when they put stuff in Youtube they got a chance it's going to go down. I generally don't put them listed on my site prominently since most of them go down after that.. LOL Either way I'm almost positive they know about this now and haven't done much with the ones that have.

I thought it was interesting that, when Alison was interviewing David Campbell at the very end, the two of them were talking about how he had gotten the farthest on the Ultimate Cliffhanger of any AMERICAN. To me, that says that some Japanese competitor beat the obstacle. Here's hoping the full competition airs soon in Japan so we can find out.

Holly S**T! 3rd oct is my Birthday! They better air it on this day to make me super happy.
Not a chance to watch it in my country, but God bless the Internet. =)