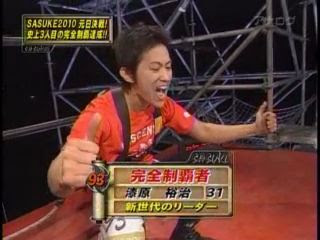 3rd Sasuke Champion Yuuji Urushihara 漆原裕治 (Sasuke 24 blog)
After what seems a lifetime.. G4 has finally announced on their Facebook the Sasuke stars that are coming to ANW2. As I mentioned in my previous blog from last week, Allstar - Makoto Nagano 長野誠 is making a return trip to the United States. G4 FINALLY announced it (a little late for a lot of people to actually go since they left it to the last minute.. but I digress... ).
For the very first time 3 Ninja Warrior stars will make their way to the US and head to Venice Beach this Saturday and Sunday for the taping of American Ninja Warrior. Make sure to be on hand to meet these 3 incredible Ninja Warrior stars as they sign autographs for all their adoring fans. This truly i...s a once in a lifetime opportunity. (check back for the each star's specific
signing times) 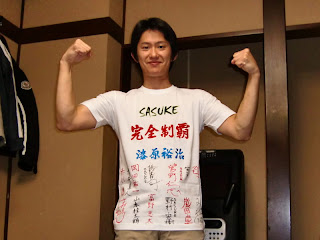 Sasuke's 3rd Champion Yuuji Urushihara 漆原裕治 posing for friends and showing off a gift shirt created for him during a friends gathering in April, 2010 ©Ryo Matachi 又地諒 (from the State of Sasuke Blog)
For those who are unfamiliar with a couple of these people (especially those who are far behind in tournaments) let me refamiliarize you with who they are. First is our current Sasuke Champion Yuuji Urushihara 漆原裕治. He's from Tokyo and his occupation is a shoe salesman. For those of us who have seen him for a bit longer (and ignored the blatant G4 errors in his biography...) he's been doing Sasuke Trials for quite a number of years. His first tournament was Sasuke 21 where he qualified for Sasuke by defeating all of the All-Stars (and everyone else) in a festival called BUG IN MIKI back in 2008. In Sasuke 21 he was stopped by the Flying Chute. He then had to go back to re-qualify in Sasuke Trials where he won another trip back to Sasuke in Sasuke 22. There he became finalist. In fact in his short Sasuke tournament career he's a two-time finalist (Sasuke 22 and of course his win in Sasuke 24). He is a proud member of a small group of Sasuke Trial Specialist called UNCLI (Unlimited Cliffer). He is Cliffer #3. 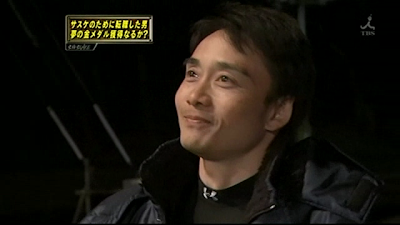 The next person is actually a track star from the 1990's Yoshiyuki Okuyama 奥山義行. Although he never made the Olympic Team (despite what G4 has told you) he's competed for Japan in the World Championships specializing in the 200 meter distance. Sasuke-wise he's proven to be one of the most consistent competitors. He's competed 7 times and is already a Sasuke Finalist (Sasuke 24). Despite his age (now 40) he's been consistently to the 2nd and 3rd stages of Sasuke. He's been outperforming people almost twice his age and even though the course has changed a few times he still is an expected Stage 2-3 competitor. 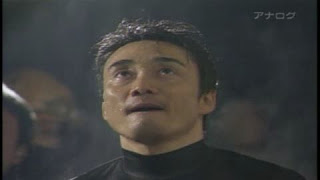 Yoshiyuki Okuyama 奥山義行 - (Sasuke 25)
ANW2 which starts Saturday, August 7th and runs to Monday, August 9th (though exact details on the reality TV inspired final are not clear). At this time it is unclear how long any of them will be staying here in the USA. G4 is announcing so far just Saturday and Sunday though the semifinals are on Monday. We'll have to find out what they have in store for these 3. Hopefully not at the last minute. 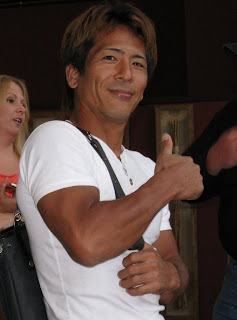 I shouldn't have to explain who Allstar - Makoto Nagano 長野誠 is so I'll spare you his biography :) If you need one.. YOU DON'T WATCH THIS SHOW :) Ehem..

So for you guys planning on going to watch American Ninja Warrior 2 in Los Angeles, PLEASE say hi and welcome ALL THREE of them to the United States.. and SEND ME PICS so I can post them :) You know me and pictures! :D mwahahahahahah So sucks being poor and not being able to travel... /sigh I hope their trip is a pleasant one!
Posted by Arsenette at 11:28 PM

Sorry for being so late on this (and for going off on the following tangeant) but I just wanted to stop over and voice my support regarding your frustration with the way G4 is now handling Sasuke.

The thing I love about Sasuke is that it's not really a competition. There can be more than one winner, and the camraderie between the all-stars is something I always found touching. In contrast, I've always felt that the general tone of Ninja Warrior was that they were in direct competition with each other, what with all this talk of "he just smashed his title!" blah blah blah. Left a bitter taste in my mouth.

At some point I began to feel that G4 was slowly trying to take over and turn it into their own show. I loved the fact that the show had so many diverse competitors, and I feel that now G4 is trying to exhert this dominance over the whole operation. Almost as if they're bitter that none of their contestants has beat it yet. They might as well just come out and say "yeah, we'll show them who is boss. we'll make our OWN show!" And I'm in agreement with you about the cash prizes. Won't even go near that one.

These events/decisions are (IMHO) in direct opposition to what the spirit of Sasuke embodies!

Sorry to get all crazy on you. I just wanted you to show my support (as I would imagine you've gotten some hate mail). Stay strong!

Hey Rufus :) Thanks. Yeah it's been interesting around here. Most of the hate mail always starts as "you wouldn't know of Sasuke if it wasn't for G4"... and usually I start to tune it out.. but oh well. I agree entirely with your assessment of the situation since that's how I feel about it. Looking forward to 26 whenever they get around to announcing it and praying for it to be better received in Japan this time around.

Wish G4 would get their hands off of Sasuke - they give me the creeps.

Yeah.. though the amount of money G4 is flashing M9 right now.. I doubt that will ever happen.

sorry to be a prick here but how many Sasuke competitors are 80? hahaha...sorry for having a joke at your expense. hope you don't mind. :-p

of course i know you actually meant "half his age" instead of "twice his age". Sorry!